The model is first presented in textual format, followed by an image, and then an explanation.

Biological, Environmental and Event factors feed into a Psychological Process. This psychological process leads to the development or exacerbation of a mental health issue and to suicidal behaviour. On a cognitive level, this affects how the individual thinks and feels about the past, present and future. 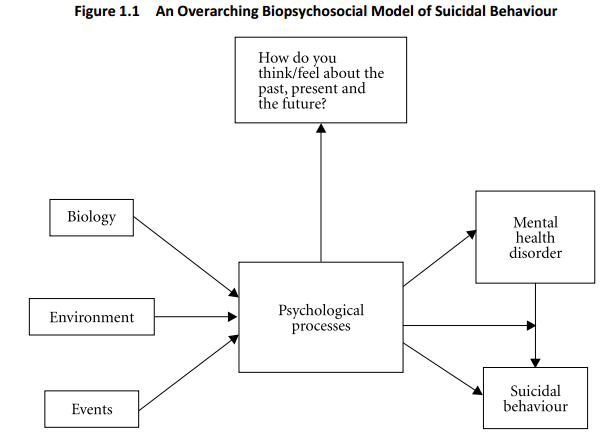 There are a number of biological factors that can increase the risk of suicide which have been reviewed by Pandey (2013). These include genetic predisposition of suicidal behaviour (Turecki, 2001) which may be related to increased prevalence of impulsiveness and aggressiveness.

5HT receptors are receptors in the brain that are activated by the neurotransmitter serotonin. Serotonin plays an important role in mood (Yohn, Guerges & Samuels, 2017), appetite and eating (Sharma & Sharma, 2012), sleep, memory and sexual function. Improperly functioning 5HT receptors may play a role both in depression and in suicidal behavior.

It has been well-documented that teens and adolescents are more impulsive than adults as their brains continue to develop up to age 25 (Kasen, Cohen & Chen, 2011) and this can increase their risk of suicide and homicide. (Glick, 2015) Witt et. al. (2008) examines this through the lens of the Interpersonal Theory of Suicide – suggesting that impulsive individuals are more likely to have acquired capability (through being exposed to pain), which is one of the 3 key elements of that Theory of Suicide.

Environmental influences on suicidal behaviour include literal environmental factors like sunlight exposure and situational factors like presence of abuse, history of suicide attempts and other items that are commonly known as suicide risk factors.

Souêtre et. al. (1990) found that decreased sunlight exposure and lowered temperature was linked to increased risk of suicide. This may explain the high rate of suicide in Nordic and Scandinavian countries that lack many of the other risk factors for suicide. Lam et. al. (1999) found that light therapy decreased suicidal ideation in a population of women who struggled with Seasonal Affective Disorder (SAD).

Evans, Owens & Marsh (2005) found that an external locus of control (believing that life “happens to one” rather than one having control over their life) was associated with an increased risk of suicide in adolescents. This likely holds true in adults as well.

Other risk factors for suicide include the American Association of Suicidology’s IS PATH WARM mnemonic:

Sometimes an event occurs in someone’s life that is so devastating that it may lead to suicide. For instance, relational changes and other interpersonal issues (such as a loss of a relationship or fights with a friend) commonly precede a suicide attempt (Yen et. al., 2005; Bagge, Glenn & Lee, 2013; Conner, et. al., 2012)

In addition to interpersonal events as described above, events that may lead to suicidal behaviour include being arrested, charged or sentenced with a crime (Cooper, Appleby & Amos, 2002). Zhang & Ma (2012) also found this in a Chinese sample of suicide attempters, with the most common stressful life events preceding suicide involving family/home, hospital/health and marriage/love.

It’s clear that the biopsychosocial model of suicide has a fair amount of support for its component parts. It may be difficult to apply the Biopsychosocial Model directly in a clinical or therapeutic context. For that reason, other models may be preferred for intervention purposes.

Kasen, S., Cohen, P., & Chen, H. (2011). Developmental course of impulsivity and capability from age 10 to age 25 as related to trajectory of suicide attempt in a community cohort. Suicide And Life-Threatening Behavior, (2), 180.

Cite this article as: MacDonald, D.K., (2017), "Biopsychosocial Model of Suicidal Behaviour," retrieved on January 28, 2023 from http://dustinkmacdonald.com/biopsychosocial-model-suicidal-behaviour/.