Frequency distributions are a simple way of organizing data based on how many each item has occurred. This can be used for individual values or for age ranges.

The steps for making a frequency distribution are pretty simple. Let’s take a set of 20 students and their ages:

Let’s work through these steps one by one.

As you can see, each of the values occurs four times, except for the age 17 which occurs five times, and the age 18 which only occurs twice. From this data we can begin drawing rudimentary conclusions about the individuals in the sample. For instance, this group is relatively evenly distributed, except for 18 year olds which are under-represented.

It is slightly more complicated to put together. Before we start, let’s go over some definitions.

Let’s use the following dataset that contains 16 people, using the amount of time it took people to perform a task to demonstrate these terms:

What “under 1.5” means is that any value between 0 and 1.499 would qualify, but it is worded this way to simplify things.

The 2k guideline says that the square of the correct number of intervals should be greater than the number of items in the dataset. F6or instance, in our example we have 16 people, so let’s work through the squares:

So, in this example we could use only 4 intervals if we needed to, but the authors of the set (which came from a statistics textbook) chose to use 6 to make the data easier to see. Ideally you want the number to be between 5 and 10.

To determine the best distance between the intervals (in this case they’ve chosen 1.5), you can take the range (which is the highest value minus the lowest value) and divide it by the number of classes.

Let’s assume the highest value was 8 and the lowest value was 0.1. Our “distance calculation” would thus be: 8 – 0.1 / 6 = 1.31. Again, the authors chose to use a simpler value to make interpreting the data easier.

Once you have your frequency distribution, you can turn it into a visual display with a histogram, which looks almost like a bar chart and enables us to see the data at a glance. An example of a histogram is below: 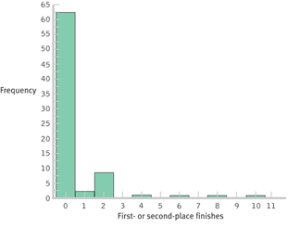 Cite this article as: MacDonald, D.K., (2015), "Frequency Distributions," retrieved on January 29, 2023 from http://dustinkmacdonald.com/frequency-distributions/.