SLEIPNIR is a tool developed by the Royal Canadian Mounted Police (RCMP) and used in criminal intelligence analysis to assist in the ranking and comparison of the threat of organized crime groups. SLEIPNIR is an example of a structured professional judgement (SPJ) tool similar to the SAVRY.

By using the Sleipnir tool you can determine the level of risk presented by a number of organized crime groups, compare them to each other and determine where intelligence gaps exist. (IALEIA, 2011)

Sleipnir is not designed to be used as a tactical intelligence tool, but rather as a strategic one to assist in setting priorities.

From Strang (n.d.), comes this example image comparing 5 groups along the 19 items: 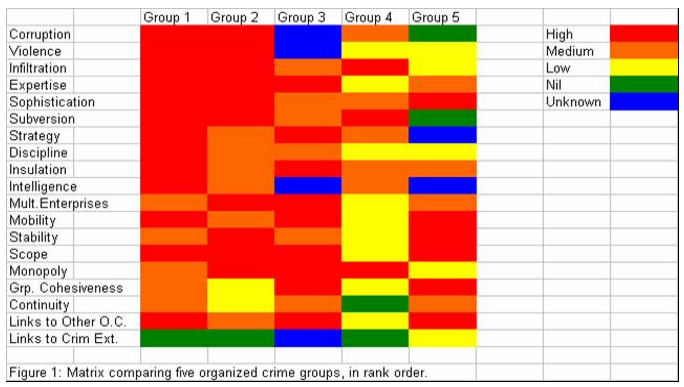 In the list below, they have been reverse coded based on the scoring system you’ll see in the next section.

Where P is the number of the subcomponent in the list above. For instance, if Monopoly (#5) is High, Intelligence Use (#10) is Medium and Violence (#18) is Low, they would be scored the following:

The total will be 68. The maximum score is 0 to 760 and a higher score (relative to other organizations being checked) represents a higher level of dangerousness.

There are specific operational criteria for each of the components and scoring levels.

I have since obtained a copy of the report. Because the definitions and ratings (of High, Medium, Low and Nil risk) are under copyright to the RCMP please contact me if you’d like information on how to access them.

Edit: I’ve located a copy of the definitions on the web, they can be viewed here.

In addition to being used in Canada by the RCMP that developed it, Sleipnir has also been used successfully in Honduras where gang violence is endemic. (Ratcliffe & Rose, 2015)

It should be noted that these factors, while ranked as above in the original Canadian research, may not be generalizable outside of Canada. This means that other countries may weigh these factors differently. (Ratcliffe, Taylor & Strang)