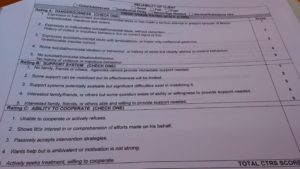 The Crisis Triage Rating Scale (CTRS; Bengelsdorf, et. al. 1984) is a telephone triage tool that can be used for determining whether an individual in crisis requires psychiatric assessment. Turner & Turner (1991) determined that a cut-off score of 9 or lower necessitated admission. This was confirmed in a follow up study by Adeosun et. al. (2013)

The CTRS has three subscales:

Each category is rated from 1-3, so the entire scale is scored from 3-15 (with a lower score representing less functioning.) This copy of the CTRS from the Human Services and Justice Coordinating Committee lists the response guidelines:

Community Use and Validation of the CTRS

The CTRS has been used in community organizations that have mobile crisis teams, for the purpose of assessing whether callers require inpatient admission to a hospital. This can help guide the often murky process of crisis assessment.

Bonynge & Thurber (2008) determined that the CTRS was accurate in determining the difference between inpatient and outpatient treatment but that with all the tools tested (the Crisis Triage Rating Scale, the Triage Assessment Form and the Suicide Assessment Checklist), the determination of exactly what inpatient treatment (Hospitalization in a psychiatric or substance abuse settings, partial hospitalization or crisis beds) is most effective.

Molina-Lopz et. al. (2016) note that the CTRS “requires knowledge of each patient’s social and family support system at the time of assessment, which can be especially difficult to gauge in aggressive, agitated, suspicious, isolated or non-cooperative patients” which is a reasonable criticism of the Support System subscale of the tool.

The criteria used for the Dangerousness subscale is also interesting, for each rating there are 3-4 criteria given. Because of the difficulty in evaluating these (e.g. “Expresses suicidal/homicidal ideas with ambivalence, or made only ineffectual gestures. Questionable impulse control”) the reliability of the CTRS may be suspect.

The CTRS can be downloaded from the Human Services and Justice Coordinating Committee here.