Correlation refers to the idea that two variables (x and y) impact each other. For instance, the grades in a statistics class may be related to, or correlated with the amount of time those students study. As study time goes up, grades go up. This would be a positive correlation. On the other hand, as time spent partying, grades go down. This is called a negative correlation.

One common expression is “Correlation is not causation”; this refers to the idea that items can be correlated without really being related to each other. For instance, there is a close connection between the rates of ice-cream consumption in the winter and the drowning rate, even though one really doesn’t affect the other.

How to Calculate Correlation
Pearson’s r (also known as the correlation coefficient) is a simple correlation tool to work with. (Technically the r is used for samples and p is used for populations, but we’ll be working with samples, a limited amount of the total so we will simply refer to it as Pearson’s r or r.)

The formula is here:

This formula may look complicated, but let’s step through it step by step.

Let’s look at the following set of data of student absences and their final grades:

The first step is to create a scatterplot of the data to see if any patterns stick out: 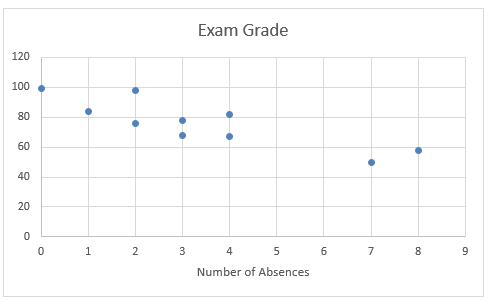 This shows a moderately negative correlation, as absences go up, grades go down.

Moving to the equation, let’s look at the top part fist:

Next, we must multiply the values of each of these together:

Next, let’s look at the bottom part of the equation:

We take the square of each of the X values and sum them up. We do the same for the Y values.