Substance use disorders (also known as substance abuse) are a group of conditions where an individual experiences “the recurrent use of alcohol and/or drugs causes clinically and functionally significant impairment, such as health problems, disability, and failure to meet major responsibilities at work, school, or home.” (SAMHSA, 2015)

There are a variety of assessment tools used for determining the severity of the substance use disorder. These are reviewed below.

The CAGE Alcohol Questionnaire (O’Brien, 2008) is a four-item test to assess alcohol abuse. The letters “CAGE” are an acronym to help you remember the four questions:

Each question is scored yes or no, with one point per yes. A score of 2 or higher represents clinically significant potential for alcohol abuse. (Malet, et. al., 2005) There is also a modified scale for Drug Use, below:

CAGE Questions Adapted to Include Drug Use (CAGE-AID)

The psychometric properties of the CAGE-AID were tested in Dyson et. al. (1998) where it was found to be an effective tool.

The Self-Administered Alcoholism Screening Test (SAAST) was originally a 35-item self-administered test for alcohol abuse developed by Swenson & Morse in 1975 (see the Reference List for the citation – I haven’t been able to track down the original to read it.) It was updated by Vickers-Douglas, et. al. (2005) as the SAAST-R, and this is the version presented below.

The below items are used for the clinician’s benefit but are not calculated into the total score:

In the original SAAST the cut-off score was greater-than or equal to 6 indicating the potential for alcoholism, with 10 indicating probable alcoholism (Davis & Morse, 1987), but in the revised SAAST-R the cut-off score is 4. (Patten, et. al., 2006) Given that the moderate to severe options explored in the original SAAST have not been validated yet, attempting to apply those ratings (e.g. equating a score of 10 on the SAAST-R with a score of 10 on the SAAST) should be done with caution.

The Drug Abuse Screening TEST (DAST) was developed as a 28-item self-report test for substance use or drug abuse by the Psychologist Harvey Skinner. It was based on the Michigan Alcohol Screening Test (MAST) but with the word alcohol changed to drugs. Subsequent review shortened the tool from 28 items to 20 and then to 10. It is now available in those two formats, the DAST-10 and the DAST-20.

The European Monitoring Centre for Drugs and Drug Addiction (EMCDDA) provides a copy of the DAST-20 along with a review of its psychometric properties showing it is an effective tool for identifying struggling with addiction (2008).

The DAST-10 is available from the National Institute on Drug Abuse (n.d.). The DAST-20 and the DAST-10 have an extremely high reliability (r = 0.97) indicating they are virtually identical in their output scores. (Villalobos-Gallegos, 2015)

The Fagerstrom Test for Nicotine Dependence is a 6-item tool for assessing nicotine dependence or severity of smoking addiction. It was developed in 1991 by Karl-Olov Fagerström. There are 3 yes/no items that are scored “0” (no) or “1” (yes), and 3 multiple choice items scored from 1-3. (NIDA, n.d.)

The items on the Fagerstrom Test are as follows (see the link for a printable version). The scores are in brackets:

The Fagerstrom Test has demonstrated fair reliability and validity but requires more comparative studies to test its validity. (Meneses-Gaya, 2009)

The BTITP program provides a chart with recommendations for NRT: 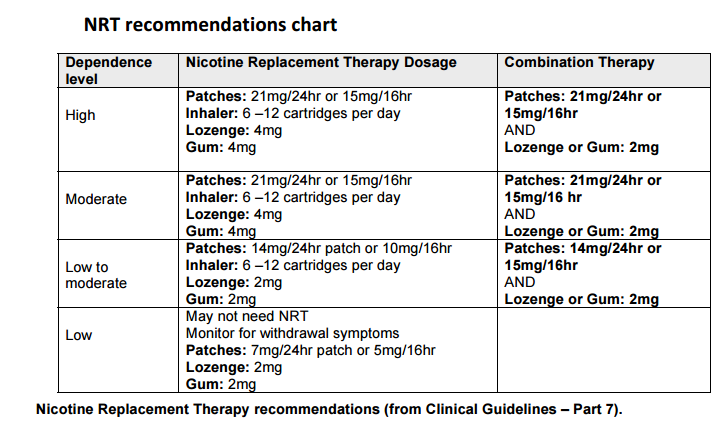 More information can be obtained from the book “Sourcebook of Adult Assessment Strategies (Nato Science Series B:)

Cite this article as: MacDonald, D.K., (2016), "Assessments for Substance Use Disorders," retrieved on July 6, 2022 from https://dustinkmacdonald.com/assessments-substance-use-disorders/.

2 thoughts on “Assessments for Substance Use Disorders”