There are a variety of sources related to Canadian suicide statistics, but no source effectively summarizes all of the statistics, with graphs and charts, and links back to the original citation. The purpose of this article is to provide the most up-to-date information on suicide by method, gender, province, age-range, and other characteristics. The most common source of data is Statistics Canada.

Although other countries may calculate suicide differently, Canada ranks approximately 70 for both sexes suicide, 70 for male suicides and 73 for female suicides (out of a total of 170 countries, where lower is better), based on 2012 data from the World Health Organization. (WHO, 2012)

Suicide by Age in Canada

The largest population of suicides in Canada are from men and women 45-59. All Ages data includes suicide of those of unknown age and those under 10.

Chart, Suicide by Age in Canada

Suicide by Gender in Canada

The chart below shows the gross number of suicides in order to demonstrate the male percentage of the total. (Statistics Canada, 2012)

Chart, Suicide by Gender in Canada

Statistics Canada (2016) notes a World Health Organization source that notes up to 20 suicide attempts for every suicide death.

Suicide Attempts by Gender in Canada

Females attempt suicide 1.5 times more often than males (Langlois & Morrison, 2002) Mustard, et. al. (2012) note that the rate of suicide attempts among women is 3 times that of men. Both sources are referred to in Statistics Canada (2016).

Suicide by Method in Canada

Suicide methods impact lethality, therefore it is important to understand the most common methods used to attempt suicide in Canada. Men are likelier to use more lethal means like hanging and firearm than women are (Bilsker & White, 2011) increasing their suicide lethality. 1998 data reveals the following gender breakdown by method for suicide (Langlois & Morrison, 2002)

Additionally, the following information is provided for poisonings (these numbers make up the total poisoning deaths number above):

Chart, Suicide by Method in Canada 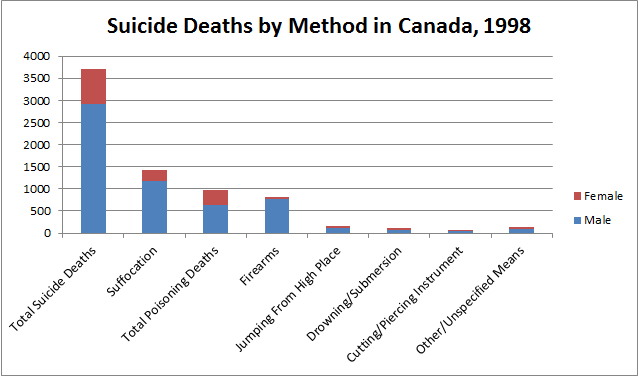 The above chart shows total poisoning deaths. The below chart breaks out poisoning into the various types: 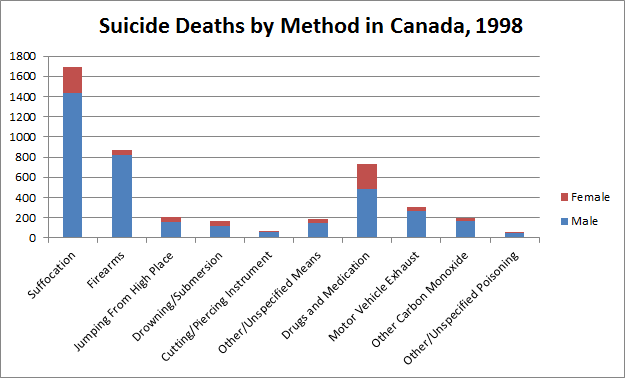 Suicide by Province in Canada

Chart, Suicide by Province in Canada 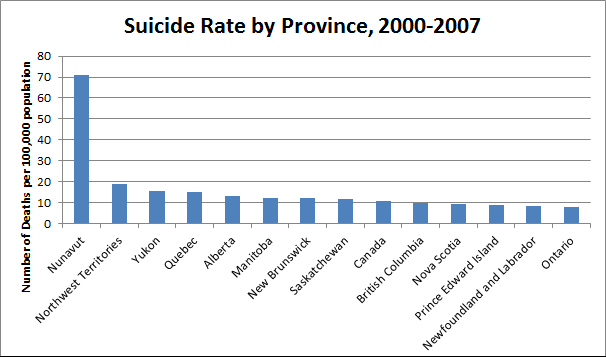 Youth suicide in Canada has been relatively stable for several years. Suicide is the 2nd leading cause of suicide in Canada for ages 15 to 34. (Statistics Canada, 2015a) Additionally, there are more suicide attempts in youth than adults, with Schwartz (2003) estimating between 50 and 200 attempts per youth suicide death.

It has been well-documented that the LGBT community has a higher rate of suicide than the general population.

Approximately 30% of suicide deaths and 28% of suicide attempts in Canada involve lesbian, gay or bisexual individuals. (LGB; Banks, 2003) The LGB population was estimated by Statistics Canada (2015c) at approximately 2%, though this is likely an underestimate.

The trans suicide rate is dramatically higher than the LGB rate. Between 20 and 40% of transgender individuals report suicide attempts, while a study of trans youth in Ontario reported that 35% had suicidal thoughts and 11% had a suicide attempt in the previous year. (Bauer, 2015)

Military member and military veteran suicide has increasingly been in the public consciousness. In 2012, the Canadian Forces had 10 suicide deaths by current members and 11 suicide attempts by current members according to a Global News article citing Department of National Defence data. (Minsky, 2015)

Given a strength of approximately 68,000 Regular Force members and 27,000 Reserve members, 10 suicides leads to a suicide rate per 100,000 of approximately 9.5, slightly lower than the general population rate of 13.1.

See my article Suicide Prevention in the US Military.

Banks, C. (2003) The Cost of Homophobia: Literature Review on the Human Impact of Homophobia On Canada. Community-University Institute for Social Research. Retrieved on August 27, 2016 from http://www.usask.ca/cuisr/sites/default/files/BanksHumanCostFINAL.pdf

Minsky, A. (2013, 4 Dec.) “For every suicide in the Canadian Forces, at least one attempt was recorded: documents”. Global News. Retrieved on August 27, 2016 from http://globalnews.ca/news/1009779/soldier-suicide-one-attempt-for-every-death/