This post is part of a series I’ve been chipping away at, where I teach basic statistics and probability. The other posts in the series include:

Variables are the outcomes of a psychological measurement. As the Australian Bureau of Statistics notes, a variable is “any characteristics, number, or quantity that can be measured or counted.” Also called data items, they are called variables because the “value may vary” and may change over time.

There are four scales of measurement used to distinguish variables:

These can be ranked from least education to most education, but there is no way to tell necessarily how much “more” education a Bachelor’s degree is when compared to a graduate or professional degree.

An interval variable is an ordinal variable where the different items are evenly spaced. For example, income level:

Each one of these is evenly spaced. There must be a continuum to measure an interval variable.

Ratio variables are like interval variables but with the notable exception that “0” indicates an absence of the value. For example, in our previous example income level happens to mean no money. If we look at temperature however, 0 degrees Celsius does not mean there is no temperature. This makes Celsius an Interval Variable.

On the other hand, Kelvin is a ratio variable because 0 Kelvin really means no heat or temperature at all (as we say, absolute zero.)

One more distinction is the difference between continuous and discrete variables. Continuous variables are those that can take on any value. For example, a variable that can have any number between 10 and 11 (10.48938, 10.74982, 10.9999) is continuous.

If the survey only has two values with with nothing in between (like 10 or 11) then this is a discrete variable, also known as an integer.

Why Separate Variables into Categories 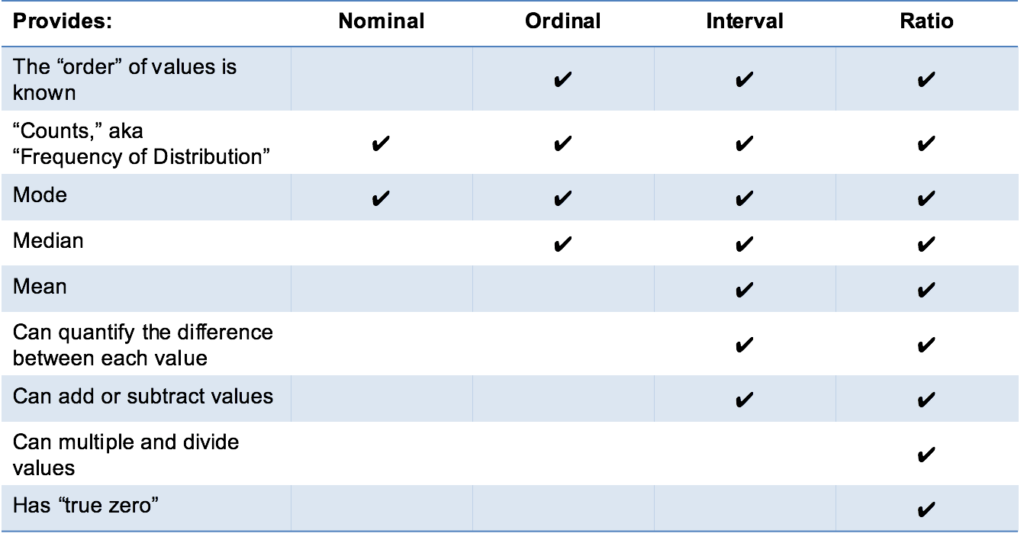 It’s important to understand whether the variables we are working with are nominal, ordinal, interval, ratio, because we’ll use different statistical tests when working with different data. Coding, and other manipulations and processing of the data may also differ depending on the variable.